TIJUANA – In the 1930’s, artists Diego Rivera and Frida Kahlo were at the vortex of the “Mexican Renaissance”, surrounding themselves with an inner circle of intellectuals and creatives, such as Trotsky and Andre Breton. The group asserted some influence on society with regard to their views on socialism and liberal politics, giving Rivera the leverage he needed to paint as he desired and include images of communist leaders in his mural work. While based in Tijuana, not Mexico City, and lacking the tempestuous relationship that Diego and Frida shared (they’re just good friends), Josue Castro and Karla Navarro combined their powers of art and cuisine to bring together their own circle of influencers from the worlds of business, art, music, education and media. Called WTF (Where’s The Food), 12 “hedonists” gathered around a table Saturday March 17th at Josue’s “The Kitchen” in the Zona Centro neighborhood of Tijuana for a clandestine 12 course meal, drinks, art, photography and some stimulating conversation about the evolving reinvention of Tijuana.

Josue and his business partner Andrew Sheiner have been hosting events at The Kitchen for 12 months, including multi-course meals, films and concerts (In April, The Kitchen hosted an intimate performance by Tijiuana’s Madame Ur y sus Hombres). Although they still house Josue’s gallery there, the pair felt that they needed a larger space for these types of events than they currently have at gallery La Tenacion in Pasaje Gomez. Prompted by Castro’s need for 1000 square feet of space, a former Avon cosmetics warehouse in Zona Centro at 7th & Constitucion was rehabilitated to house The Kitchen and other businesses desiring new space for restaurants, galleries and shops.

El Gringo was privileged to be invited to WTF at The Kitchen as one of the twelve hedonists (I have a bit of experience, so was not intimidated). Other guests included local business people, artists, musicians, educators, and members of the media. All 12 of us enjoyed 12 courses of amazing food prepared by Karla Navarro, a kitchen staff of three, and an attentive wait staff. 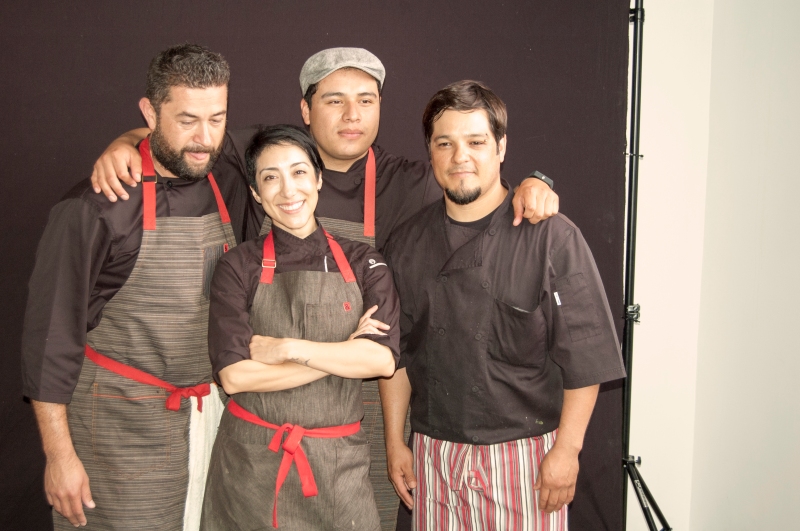 All of the courses were based on Baja California classics such as locally-sourced fish, ceviche, quail, shellfish, Puerto Nuevo style lobster and oxtail. The meal was accompanied by Valle de Guadalupe wines, local Tijuana craft beers and a mezcal from Oaxaca that had been custom crafted for one of Tijuana’s top chefs. Everything was delicious! Check out the slideshow below for all 12 courses, presented in the order in which they were served.

Although WTF really stands for “Where’s The Food”, there were a few WTF? touches around The Kitchen. Most prominent were Josue’s large portraits of Baja California chefs grittily photographed in black and white with an S&M motif (he’s currently working on this series). Another WTF? touch was the hostess, a silent, masked model in a black bra and tutu who served hors d’oeuvres and drinks as we mingled before the event. Josue had also set up a corner of the room with lights and black paper to photograph the hedonists with the model, as well as with Karla. He explained the concept to me, “I’m a hedonist. I like beautiful women, good food, good wine, good music. And The Kitchen is a place where they all come together.” 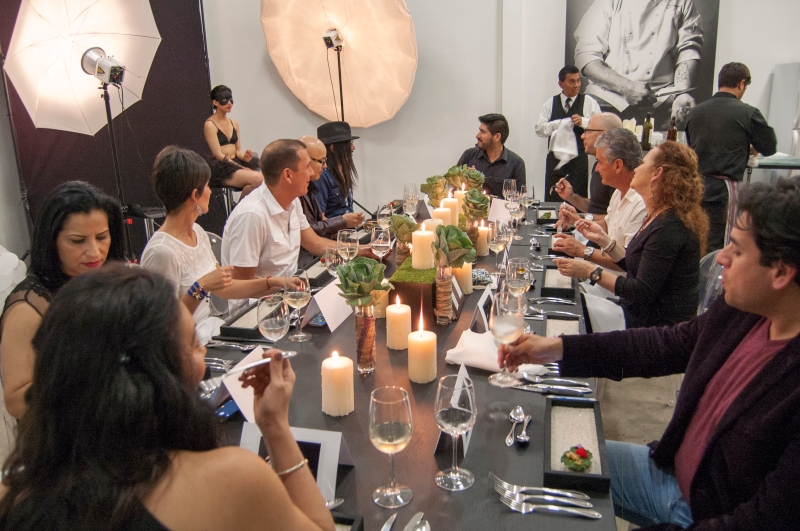 During the meal, Josue took time between courses to further explain his vision for The Kitchen, Zona Centro and Tijuana’s image in the US media, “When people think of Tijuana in the US, they think of migrants, drug dealers, prostitutes. Those are a part of Tijuana, like most major cities, but not all of Tijuana. There are a lot of people in the community here that are working very hard to improve the image of our city and get people from the US to come back to Tijuana. Galleries, businesses, restaurants, all of us working together. TJ is a cool city, and we want people to know that.”

Genaro Valladolid, of Bustamante Realty Group and real estate agent for the property at 7ma & Constitution, waved his hand across the spacious outdoor balcony at The Kitchen, indicating the neighborhood before us. “If you look around Zona Centro here in Tijuana, all of the buildings are old. There’s been nothing new built here for a long time. Years ago, this neighborhood was where all the wealthy people lived. Then, like so many other cities, they started to move out of the center and into the suburbs, and then even further. The lofts here represent the FIRST new development that’s happened in Zona Centro in sixty years.”

El Gringo also had the pleasure of meeting Ramon Bostich and Pepe Mogt from Tijuana band Nortec Collective. On the balcony talking to Pepe, a car drove by and somebody screamed, “HEY PEPE!”, just another rockstar moment for these musical innovators. Pepe had worked with Anthony Bourdain on the Baja California episode of No Reservations, and really enjoyed the experience. “Anthony was cool to work with. That was good exposure for Tijuana, but not enough. Many people are working to get the middle and upper middle class people from the US and Mexico to come visit the city. There’s so much good that’s happening here.”

Most of the evening’s conversation focused on the topic of Tijuana’s evolution, the great things about the city and the overall perception of Tijuana in the US. “Tijuana is constantly changing,” Josue told me. “In fact, the next time you come back, there will be something new, different, exciting. The Kitchen is a part of that. We are available for different functions, for groups or individuals, and will host art, performances, whatever anyone can think of that would work well in this space.” The night ended with strong coffee, brewed in the Japanese style by Tijuana’s Gerardo Grijalva, owner of Jacu. The coffee and his Cold Brew were fantastic, and Gerardo warned us that we might have trouble sleeping after consuming (it was nearly 2AM, and El Gringo had NO problem passing out whatsoever back in his hotel room). At the end of the night, we hedonists parted ways, exchanging embrazos, handshakes and business cards. We headed out into the Tijuana night. Unafraid, inspired and hopeful for Zona Centro, Tijuana and the people who are living and creating here, trying to bring about a “Tijuana Revolution” just as Diego and Frida did for Mexico so many years ago.

Your Gringo in Mexico,
Scott

Josue Castro and Andrew Sheiner’s The Kitchen in Tijuana’s Zona Centro is in the 7ma & Constitucion lofts. WTF Clandestine dinners will be held monthly by invitation. The space is also available for groups or individuals to book for food, music, film and other private events by invitation only. To learn more about The Kitchen, visit their Facebook page. Have an idea for an event at The Kitchen? Please contact El Gringo and I am happy to help set it up!